From Internet to Internet of Things (IOT)

Gone are days where one knows news in the newspaper only the next day, latest updates and access to information from around the world are made available at a blink of an eye in hand. The internet has shrunk the world that fits into everyone’s palm.

The term Internet of Things was first defined by Kevin Ashton in the mid 1990’s , according to him   “If we had computers that knew everything there was to know about things – using data they gathered without any help from us – we would be able to track and count everything, and greatly reduce waste, loss and cost. We would know when things needed replacing, repairing or recalling, and whether they were fresh or past their best”.

M2M, also called the ‘internet of things’ or ‘connected devices’ is emerging where physical  objects are  connected  through sensors and the  communications between  devices can be remotely managed or monitored through a central server(NOC) . 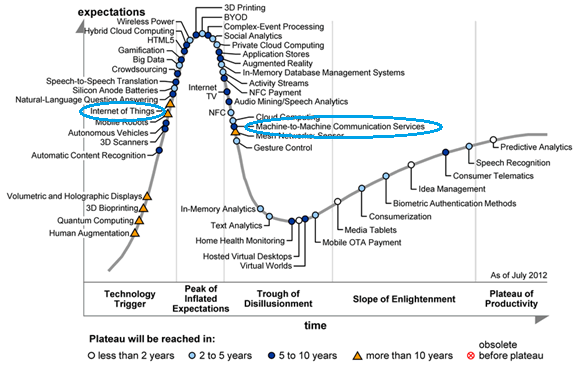 Physical objects can be anything ranging from buildings, ATMs, power grid, roadways, cars, vending machine, white goods and even plants and pets. Sensors from the physical objects sense the environment and communicate the data through a RTU (Remote Terminal Unit) , the big data generated by thousands of devices are  then fed  into M2M framework to derive analytics and   make informed decisions.

As Nikola Tesla pointed out in 1926 “When wireless is perfectly applied the whole earth will be converted into a huge brain “. The data from these physical objects enables them   to communicate with people whatever like warn driver on rash driving, provide driving guidance, alert an out-of-stock   , forecast  re-filling , notify need to be serviced/repaired,  notify an emergency  situation,  raise alarm on security breach, identify  a location  etc .,  without or with much  reduced  human intervention.